Spring, Where Did You Go?

The past two days have felt more like early or mid-April rather than the end of May. It’s been COLD. Today, at least the sun is out. The photos of the daffodils were taken back when they were blooming at Philipsburg Manor. They were so nice that I leaned over the fence and snapped the pics.

It takes a lot of time and effort to blog, but I like it. I have been taking pictures, but sometimes I don’t know if I should put up the images or not. In most cases I get lazy and don’t get around to writing the entry. There’s a story with the following photos. One morning, I saw a family of swans headed to the mill pond at Philipsburg Manor. I was in a hurry so I didn’t have time to snap any pictures, but watching the cygnets (baby swans) run towards the water was really cute.

I usually get off at the Tarrytown station in the evening, but I decided to get off at Philipse Manor to get more exercise. I’m glad that I did. Imagine my surprise when I saw the same (?) family heading away from the pond, the cygnets running all around. This time I snapped some pics.

And lastly, I went to work a few weeks ago late and happened to be looking over at the eagle statue at the Philipse Manor station when I saw this nearby. Intrigued, I snapped some quick photos. I had no idea what it was, so I emailed my friend Mary in Maryland. Mary used to be a veterinary assistant, volunteer at the zoo, and just LOVES animals, so I figured she’d know. She did:

He/she (?) is a groundhog, a la Punxsutawney Phil, or in this case, Philipse Phil!  Harmless and cute, and yes, like rats, in the rodent family 🙂

So there you have it. Wild animals are alive and well in Sleepy Hollow.

It was a very cold day today, which would have been bad enough but the wind was terrible. It felt as if winter had returned. I had to break out the winter coat again, hat, gloves and all and it was still cold.

I really enjoy walking by Philipsburg Manor. Now I look for the ducks and the swans as I go by. For the past few weeks, there have been no ducks or 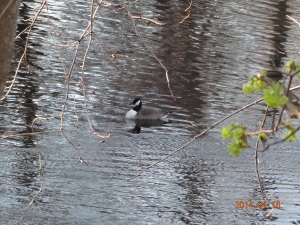 swans on the mill pond but today, of all days, I spotted two ducks. Then, somewhat further away from them, I spotted a swan, all alone.

The wind was so strong that the Hudson was stirred up with waves.  There were white caps on the waves.