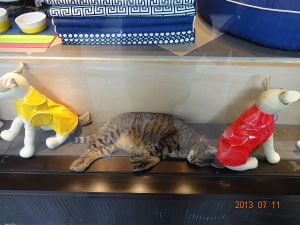 A friend and I were coming back from the Met and were walking down Lexington Avenue when she spotted this little cutie snoozing in the window.

Even the stuffed dogs don’t scare this cat.

Why I Love New York 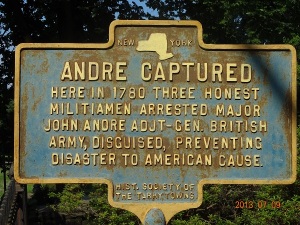 This marker is the supposed place where Major John Andre was captured during the American Revolution by militiamen John Paulding, David Williams and Isaac Van Wart. It stands at the entrance to Patriots Park, which is shared between Tarrytown and Sleepy Hollow. The local monument nearby also celebrates the capture of the British spy–in a grand way.

The local monument in Patriots Park between Tarrytown and Sleepy Hollow

A dramatic recreation of the capture of Major Andre by John Paulding, David Williams and Isaac Van Wart

The original dedication on the monument, which is barely readable

This plaque, from 1980, records the beginning part of the original stone inscription

This statue was added by John Anderson in 1880

Mary Taylor gave the land for the monument, which was built in 1853. Her monument, the low, iron-wrought fence surrounding the monument, dates from 1930

Andre’s capture was a major coup for the colonials. Had Andre gotten through the American lines the plans to the fortifications at West Point, which Andre was given from Benedict Arnold, would have fallen into British hands. In effect, the British would have been able to seize West Point and gain total control of the Hudson River, thereby opening a major route for their forces from Canada and effectively severing New England from the rest of the colonies. This incident also forced Benedict Arnold to flee to the British before he was arrested for treason.

This whole area was involved in the American Revolution, one of the more interesting parts of American history.

Art or Not? You Decide 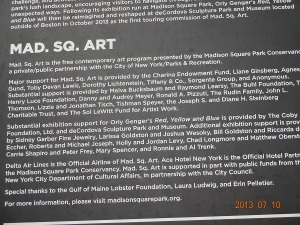 I was walking by Madison Square Park and saw this installation.

New Blogs for Q & A, and Book Reviews

I’ve decided to add two new blogs to my growing presence on the Internet. Since I’ve worked in academic libraries for over two decades, mostly in technical services (cataloging, serials, acquisitions, etc.) I am in a position to answer questions that may perplex the lay users of libraries, so this blog (http://researchinglibrarianqanda.wordpress.com/) will answer any questions posted.

Currently, I am also volunteering in a public library, so I might be able to answer some of those questions, too. Ask away!

The other blog (http://researchinglibrarianbookreviews.wordpress.com/) will be my reviews of books that I have read. Surprisingly, I used to read a lot of sci fi when I was growing up, but now I predominately read non-fiction books–and no, not in library science. I have a wide range of interests. You might find what I read of interest to you. If so, please tune in!

I moved my blog for Greece to researchinglibrariangreece2013.wordpress.com because I intend to continue to use this blog for professional research. The blog entries for Greece will stay at that site as I begin to develop this blog.